They May Think It's A Movement is a fiasco playset based off the seminal talking blues song Alice's Restaurant featuring:

Alice’s Restaurant is a staple of the folk revival canon as a lampooning of the draft, the Vietnam War, and the police through the telling of a mostly true fiasco. It is a period piece of late 60s counterculture. It is also a record of the complacency of its mostly white, nominally middle-class subjects, and, likewise, its narrator. Complacency is often the engine of injustice and oppression just as it is often the engine of fiasco, and this is no exception.

The song, Alice’s Restaurant, includes a homophobic joke and slur, and a joke about sexual assault; the movie is many ways worse. The lyrics are not sung in hate, and in updated versions the slur has been removed, but that doesn’t excuse the initial inclusion, the still remaining joke about assault, or the many more missteps of the movie.

All offending lyrics, jokes, and references have been omitted from this playbook. If I have missed anything, please let me know.

Use of safety tools such as the X-card and Lines & Veils is strongly encouraged. Discuss this with your group before play and give everyone the opportunity to go through and veto list items that might make play unsafe or unfun.

Support this playset at or above a special price point to receive something exclusive.

If you're interested in this playset and seek a folk fiasco of your own, I want to you be able to have this game. If the price listed here is standing between you and downloading this, I invite you to claim a free copy! With each purchase of this game, I'll add a copy to this pool. 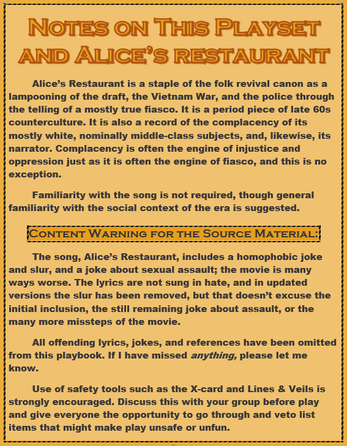 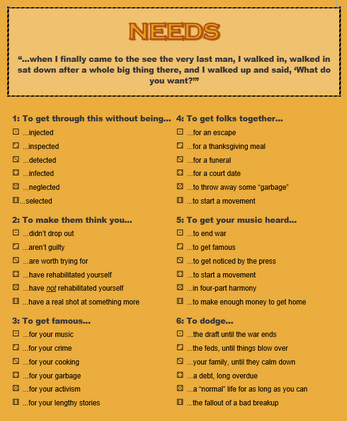